This report summarises the proceedings from the 1st pop up science fair held in Basildon, Essex whiles looking at how best communities within low science outreach regions can best be engaged with science.

Science free zone
The idea of a pop science fair in Basildon came about as a reuslt of the low presence of family oriented science activites in and around the Essex region.  This came to light a few months after I moved into the region and I found myself struggling to find science themed events nearby to go along to. For a couple of years I was still having to travel into London or Cambridge to attend a fair, a debate, a talk or other  public engagement with science events. If I, as a scientist with an active interest in science themed events was struggling, then the mass residents in the region were at a disadvantage. In light of this, I decided to find an avenue where these towns in the region could have a family oriented science event for the diary and an opportunity where they could also meet and interact with scientists about their work. I identified a museun which served as an exhibit and science education centre located on the outskirts of Chelmsford and surrounded by vast woodland, natural habitats, a flowing river and plenty of room for outdoor activities. Perfect!. 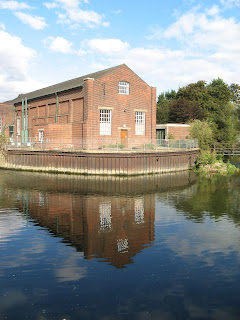 The first Big Biology Day
With the support of the Royal Society of Biology and organisers of the Big Biology Day in Cambridge, the first Big Biology Day in Essex was held at the Sandford mill museum  in Chelmsford in 2014 and it returned in 2015 as part of biology week celebrations. Big biology day is a one day science festival that engages the general public with a range of biology themed hands on activities, crafts and displays to celebrate the life sciences. Since the museum had established relationships with schools in the town, the fair was advertised via their channels and their contacts as well as a publication in the local newspaper. Flyers were handed out to schools in the neighboring towns and social media channels were also used to advertise the fair to a targeted audience. ExploreSTEM, the local STEMNET contract holder also advertised the event via their channels. 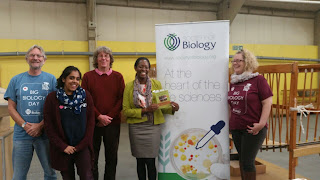 Bigger is not always better
Despite Chelmsford being a major city and capital of Essex and the Big Biology Day being held at a science museum and education centre, turn out was low over the two years, although there was an improvement in the number of activities and attendees from the previous year. Feedback from attendees and exhibitors suggested that the obscure location of the sandford mill museum was partly the reason for the low turn out as the venue was not accessible by public transport. On the flip side, attendees were thoroughly engaged at all activity stands as small numbers meant, plenty of time for quality interaction. 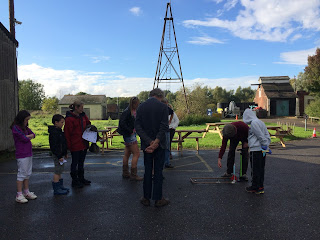 Figure 3: Members of the public engaged in a rocket flying demo.

Crossroads
The curator at the museum with whom the initial partnership was formed retired after the 2014 event and the schools liaison officer who helped organise the fair in 2014 and 2015 resigned from the museum after the 2015 fair. At this point we had two options, to foster new relationship with the new employees at the museum and continue pushing the fair at sandford mill with hope that over time it’ll become the home of the Big Biology Day in Essex or find a more accessible venue. 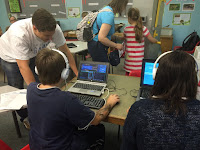 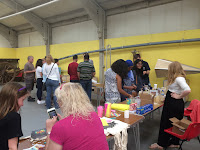 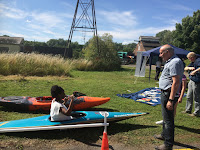 A new home
In 2016, I decided to find a new home for the hands on science fair and took it to my doorstep in Basildon. If we couldn’t get people to come to us, then we’ll go to them. What if we set up a pop-up science fair in the Basildon town centre? Families and individuals will be out and about and we can draw them in to be engaged that way. New contacts had to be made and new partnerships will have to be formed. After several calls, emails and meetings with the council the event was set.
The council held an annual careers fair at the town hall for schools and parents in the borough and we were to set up shop outside the town hall with the activities. The partnership meant a compromise had to be made and rather than having the event on a Saturday, it would be held on a Thursday afternoon. There was the notion that, people out and about their weekend shopping wanted to be in and out and the foot fall will not necessarily translate into engagement. However, a pop up science activity fair with scientists to interact with during a careers event will have active engagement from both attendees and shoppers alike.
A date was set, a call for activities was put out and advertisements sent. 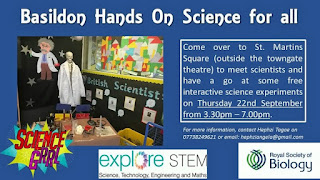 Pop up day.
It was a clear and dry Thursday afternoon and a good day to set up outside. As expected of a pop up shop, shoppers trickled to the stands as we set up and when the fair opened so did the number of visitors keen to try out the activities on display. Particularly popular on the day was the fish oil debate about genetic modification. There was a wide range of activities to engage all age groups. As parents got competitive with a ‘who am I’ board game designed to communicate aspects of skin biology, groups of individuals debated over genetic modification, whiles kids were excited with observing specimens under the microscope as they got to dress up in mini lab coats and goggles. Students and parents also interacted with volunteers about their jobs and lots more other engaging activities. 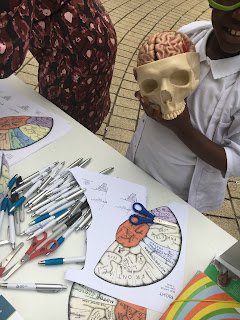 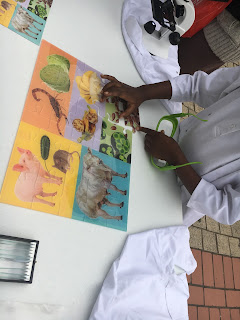 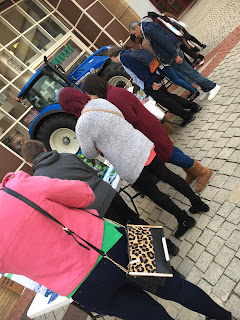 Figure 6: attendees at the fair and activity stands.

Challenges and lessons learnt
Overall, the fair was a success and the open outdoor location proved to be ideal for drawing in an audience. However, hosting the fair on a weekday afternoon/early evening meant that a significant number of scientists and volunteers were unable to make it. Having more visitors per scientist ratio meant that some people were left unattended  some of the time. However, the availability of literature kept them occupied whiles we worked our way round the audience. Secondly, forming successful partnerships plays a key role in the success of public engagement events and the successful partnerships formed over the years means there is a potential to have a growing active yearly science fair in the region. The location where a public engagement activity is held also makes a difference to the turn out as does the day and time of the event. With Southend-On-Sea being a popular destination for locals during the summer, it will be interesting to assess the uptake of a pop up science event on the beach front.


What Next?
We are back at the Basildon town centre on 9th September 2017 from 10am - 4pm and will love your support. You can bring your own activity, volunteer at one of our stands, simply share your research or tell us about your STEM career journey. 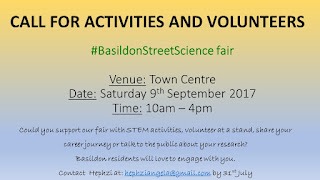 A day in school as an observing science communicator 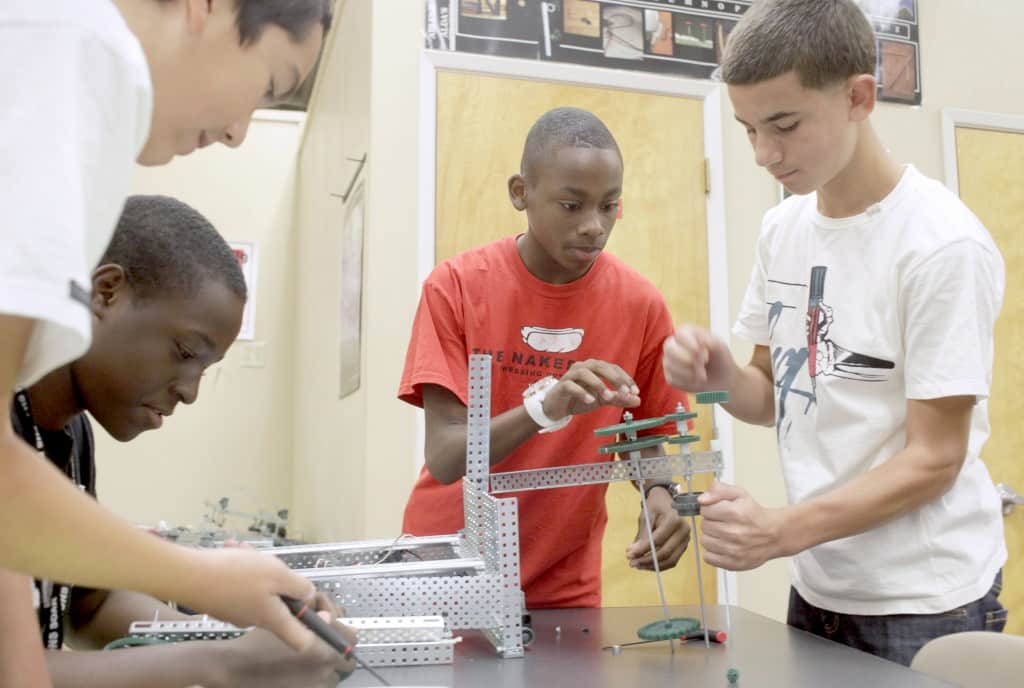